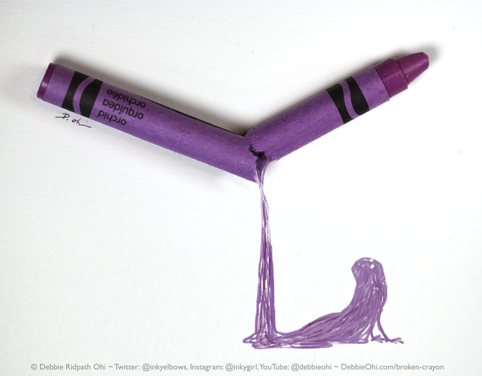 Once upon a time in the kingdom of Colours, the little Prince was cursed by the Purple witch.

The Purple witch kept to herself, and had a quick temper. Her crayons were her only friends and her paintings were her playground. But one day when the little Prince chanced upon her precious drawings, he thought they were just another set of colourful toys. And so, as was his habit with all colourful and interesting toys, he set about to investigate the drawings and in the process destroyed them.

When the witch returned from her errand to find her best friends destroyed by this little boy, she flew into a rage and cursed him instantly, turning him into a purple crayon. But once she had calmed down, try as she did, she was unable to reverse the spell cast in anger. She took the Purple crayon and flew to the Queen’s castle, apologetic and anxious. Queen Rangeena heard the Purple witch’s story patiently and held out her palm to take the Purple crayon, in which her son was trapped.

“Only love and kindness can overcome a spell cast in anger”, she finally spoke, as she placed the crayon carefully inside a box of shiny new crayon set, to be delivered to the planets.

A few months later, a little girl with red hair found this special purple crayon in her colouring set. She had received it for her birthday present and she was delighted! But soon, she lost interest and started throwing her crayons here and there or snapping them. There was a sheer pleasure she felt in breaking the crayons especially.

But when she broke a purple crayon, to her horror, something slimy started oozing out of it. And that slimy ooze started to take a form, a body, with hands and a mis-shaped head. It kept on growing in size! The little girl screamed, but no one seemed to hear her. The ball of ooze turned into a huge crayon monster and gobbled up the little girl. The crayon monster disappeared and in the place of the broken purple crayon, there was now a brand new red crayon. Within an instant though, the red crayon disappeared from the little girl’s room, to become a part of a new crayon set.

And so it went on, until after many years, the cursed crayon, now yellow in colour, turned up in an orphanage. Some wealthy donor had decided to do his act of charity for the little kids at the orphanage during Christmas, but had forgotten to take into account the sheer number of orphans living there and had turned up with just one small little box of crayons. The children were excited and disappointed at the same time. So the matrons of the orphanage handed over the crayon box to the oldest child in the orphanage – Maisy.

Maisy was kind and patient and loved by everyone at the orphanage. It was just sad that no one wanted to adopt her. She couldn’t seem to form a word in front of the adults and most of the adults seemed to be afraid of her, because when she did manage to utter a few sentences, it would be a fact so accurate that they’d wonder how did she even know?? Some even called her a witch. She thought witches were cool though, so she didn’t mind that the people who came to the orphanage sometimes whispered ‘witch’, after they met her. But she wasn’t a witch really. She was just very good at observing people and deducing stuff. Just like her hero Sherlock Holmes!

She looked at the little box of crayons and the eager pairs of eyes in front of her, waiting and wondering, who she would offer the box of crayons as a Christmas present. But Maisy being Maisy, she decided that it was Christmas and no one should go without a present. There were thirteen of them and six crayons in the box. So she decided to break each crayon into two parts and pass each half to one child. She herself, would keep the crayon box for safe keeping. She didn’t mind that she wouldn’t get any. Just being able to be a part of the Christmas joy was enough for her.

As soon as she broke the yellow crayon though, the oozy slimy crayon monster started to emerge from the crayon. The rest of the children started screaming with terror and tried to find places to hide, but Maisy was mesmerised by the monster. It seemed to start taking multiple colours, like the colours of a rainbow – violet, blue, pink, mauve, cream, white, black, red, and finally purple. Every time the crayon monster tried to take a shape with a specific colour, only to start morphing into another shape and another colour! To Maisy, it looked like they were forms of little children, but she couldn’t be sure. Maybe she was just dreaming.

In the end, despite the eerie scene, the monster never did materialise. And the yellow crayon had completely disappeared. In its place, were six brand new boxes of crayons with a letter addressed to Maisy.

Thank you for letting my curse die and for freeing the Prince. Your act of kindness, compassion and appreciation for my colours, filled my heart so much with love! Queen Rangeena had been right! 🙂

I would love for you to have the crayons from the original box and if you ever need a home, break a crayon from the box and I’ll come to collect you. Looking forward to meeting you in person some day.

Maisy tucked the letter safely in the pocket of her tunic. She smiled and the other children squealed with delight at their own shiny sets of crayon boxes! Maybe this whole thing was just some elaborate magic trick by the kind man who had dropped off the first box of crayons. Whatever it was, Maisy fingered the letter in her pocket and smiled. She couldn’t wait to break the purple crayon.

I wrote this story using a prompt from Julie Duff’s StoryADay – May 2020 challenge, so a huge thanks to her for helping me with a prompt to begin with 🙂 Also, many thanks to the StoryADay critique group and my critics Fallon, BSY and Gabrielle who helped me revise my story to make it better. A cute little thanks to my four year old who gave me the concept of the story by looking at that picture. And finally, if anyone read and enjoyed my attempt at a short children’s story, thank you for stopping by and reading 🙂 🙂