I am trying to come to terms with the loss of a loved one, and so I might not be writing my life diary series for some time. You might notice a change in the tone of my posts, maybe they will sound more sombre, serious or plain boring. So its alright if you skip my posts. I just need to keep writing, I realized, to try to hold on to my sanity and my courage.

Anyway, I wasn’t able to read much in May, but here are the three books I read this month. All the three books mentioned below are written by Indian authors, and recommended reads based on what genre you’re looking for, and if you want to understand the diaspora of Indian culture a bit more, away from the usual cliches. 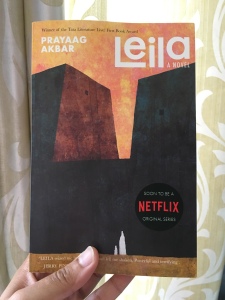 This is a fictional story set in a dystopian setting, where people are segregated on the basis of caste. I haven’t read The Handmaid’s Tale, but from what I’ve heard of the story, the beginning of the stories have some similarity in the way that here also we have a female protagonist who is liberal and independent. She has a lovely family and has things in order, until suddenly, almost overnight, things change. Amidst the change in the society and segregation and forceful control by each caste to save ‘purity’ by avoiding intermingling of people, our protagonist has her three year old taken away from her. The story after that, for sixteen years is really bleak. You follow the protagonist in her search for her daughter for sixteen years and feel her pain, but at least there is some hope. But the ending was not something I liked. I can’t write more without spoilers.

This book is going to be adapted into a Netflix series, so I’m interested to see how it turns out. It is a difficult and dark book to read though, so be prepared when you’re reading this, especially if you are a mother. 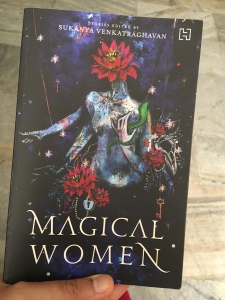 It is sad that even books that are written by Indian authors about Indian mythology based/inspired fiction, are not properly marketed or easily available in the book stores in India. I wouldn’t have come to know about this lovely book at all, had I not been following some Indian booktubers. Thank you ‘BooksonToast‘ for recommending this book. The local bookstore that I usually visit, didn’t have this book on their shelves. It seems in India, most books that are on sale are either books on facts – politics or religion, or romance books, or books written by already famous authors. But that leaves Indian readers with so much loss, because we are missing out on so many amazing books. Ok, rant done, let’s go on to the book.

This book is a tastefully written collection of fictional stories on Indian mythological women, but with a fresh and bold new take on their origins or their stories in general. There are stories inspired from folklore and mythical women characters from different states and religions, some humorous, some righteous, some heartbreaking, some science fiction based, some feminist, but each story is unique and a joy to read. You can read a more detailed synopsis and review on Sahi’s post here on all the stories featured in this book. I think this book is a great fantasy to pick up, if you want to read about a fresh take on Indian mythological magical women. 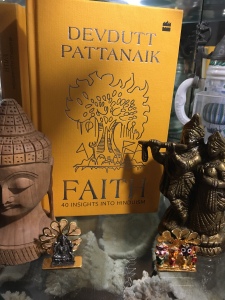 I have read only one other book written by Devdutt Pattnaik – Jaya (an illustrated narration of the Indian epic Mahabharata), and this is my second book. I really like his unbiased and informative books on Indian and Hindu mythology. Faith was a good book to pick up, since it explains many concepts of the Hindu religion, starting from origins to beliefs and rituals without taking a rightist of leftist view on this religion. Similar to Sapiens by Yuval Harari, Faith is a non fiction collection of facts on the Hindu religion. There is a lot of comparison with monotheist religions, so you will have to take this book just as it is, if you don’t want to get riled up from all the comparisons. In some chapters though, I felt as if the tone of the book became defensive. However, I liked it and thought it was a good, short, simplistically written, informative book on the Hindu religion.

How was your month of reading in May? Any great recommendations that you think I should pick up too?