It is but obvious that I forgot to write a reading and life summary for the month of April, considering everything that happened the last month. It was an emotionally and physically hard month, but everyone survived and I think that’s what is important.

From everything that happened in April, I had two key takeaways, actually inspired and said by my husband during different occasions to help me be strong, that I wanted to share with you. I hope this helps you get through an emotionally difficult time too.

First, don’t dwell. I dwell a lot. But I’m practising to stay in the moment and look at solving things practically than get emotional swayed under the currents and dwell on ‘what ifs‘ or ‘had we done this earlier‘ or ‘did I take the right decision‘ or ‘why is this happening to me and my family‘ or ‘when will this end’? You get the picture. Dwelling doesn’t solve anything. It only either adds guilt or blames something or someone or leaves you with a pounding headache.

Secondly, remember the saying, ‘When the going gets tough, the tough gets going?‘ What does it mean to be tough though? Sometimes, it isn’t about physical strength. Sometimes it’s all about emotional strength. Emotional strength comes with trying to look at the picture logically. The flip side though is, you end up looking cold, unfeeling and uncaring to the people near you. But I learnt, it was better to be called a cold bitch during times like this and be able to take a stern step than to be going through an emotional see-saw and not being able to decide what to do or how to deal with the situation.

So, after all that free advice (I hate receiving advice I didn’t ask for, so I won’t blame you if you were rolling your eyes and thinking, who does she think she is? Lol), here’s a wrap up of what I read and did in April😊📚

The first week of April was the start of my short break from work. I had 20 days of rest before my new job started and my mom and dad were coming to visit us during this time. I had lots planned. Mom and dad arrived on 2nd April, so the first week was just about spending time with them at home and taking up drop and pick responsibility of the toddler at the daycare, since I was on a break.. lol. I also finished reading Mistress of Spices during this time. You can check out my review here. 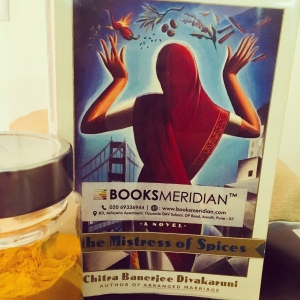 The second week, I went for my first super early morning run where I forced myself to wake up at 5 am so that I could meet a bunch of women from my block and go run 3k in the morning. It was quite a lot of fun, I realised. Luckily, I didn’t have to go to office, so I could use the rest of the day to recover from waking up at 5.. haha! I also went for a movie with mom and dad one day. Mom and I enjoyed the movie but apparently it bombed at the box office. And then one afternoon I took them out for lunch and we all ended up wearing something in yellow, without even planning it! Now that is called family bonding 😉 I was happy that I was able to take them out but we didn’t have a perfect experience because my father’s health has been deteriorating rapidly since the last few months and he found it very hard to even lift his fork and eat his meal without being stared at. He was embarrassed and I was in pain looking at his face. But we tried to be as normal as possible and finished our meal and walked back home in silence. From this point onwards, papa’s health would deteriorate more in the coming days. To keep me company during hours when mom and dad rested, I had my books, bless them. So I finished reading two great books – Pyjamas are Forgiving and The Witch Doesn’t Burn In This One, during this week. My short review here on these books. 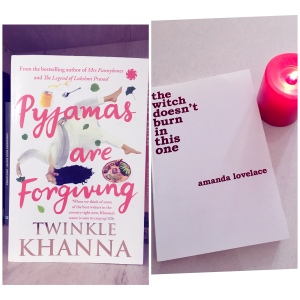 The third week brought about some change to the usual sombre atmosphere at home, with the celebration of one of the million Indian festivals. This time it was something about worshipping one of the Goddesses and feeding nine girls who haven’t reached puberty, as a sign of respect to the particular Goddess. Don’t ask me the concept or the reasoning behind this, this is just what I know from mom. And she is a devout when it comes to all things religion and festivals, and fasts etc. So, we had some kids over and forced my daughter to sit. There seemed to be some rivalry between my daughter and another girl too, as it seems from the picture..haha! This was the week when the grandparents decided to spoil the already spoilt toddler by buying her a bicycle for her upcoming birthday present, which she rode all day for exactly two days. It has been gathering dust in our balcony since then. Ahem. We indulged in a lot of eating that week, starting with the deep fried pooris on the day of the festival, to chicken and mango crepes discovered at a food truck to home made strawberry lollies made by my mother to beat the summer heat. Yummy!! I love food!

I had Miss Peregrine’s Home for Peculiar Children as my book, this week. My review is here, if you want to read my thoughts on it:) 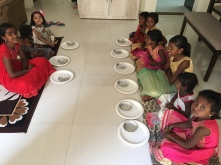 The next week went by like a usual relaxed week. We had our cousins from Mumbai come over one weekend to visit us and all the kids, including the youngest one hit the pub near our house on Saturday (The toddler drank juice, just to be clear). It was super fun. We also discovered a soft play area, right above a bookstore that I frequent quite often, so now that has become a once a month money spending destination for both my daughter and me..haha! 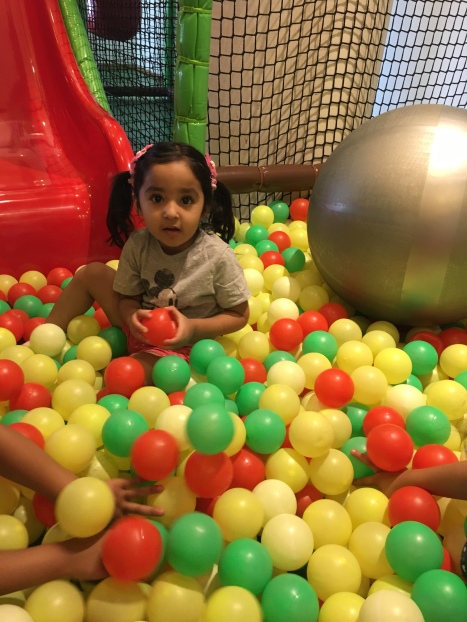 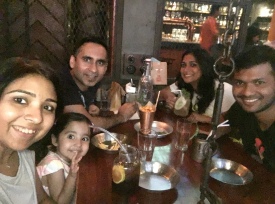 However, all the fun and frolic of the previous week was brought to an abrupt end when right after my break ended and on the first day of joining my new job, my dad had to be hospitalized. That week was tough, for everyone in the family. But I don’t want to talk about it here, since I’ve already written about it all in my personal journal. It was a serious and tiring week and we were thinking of nearly cancelling my daughter’s turning three birthday party. But then he became slightly stable and we got him discharged and decided to go ahead and celebrate her birthday, to get everyone’s minds off the sad and tough days from the week. So on Saturday of that week, my daughter turned 3 years old!! And we had a small party with some of her close friends and their parents at home. She had a pink rabbit cake (on her demand) and lots of finger food for everyone else. The children were immediately high on all that sugar, and the party that was supposed to be from 6-8 pm as per the invite, went on till 11 pm!! Thank God it was Saturday! 😀

On another note, as part of my running goals this year, I wanted to sign up for all sorts of races and challenges. So I had signed up for the ‘100 days of running challenge‘ that started on 27th April. I used to run earlier too, but was erratic and it depended on my mood. But starting this challenge made me realize how much the running and daily exercising helped me get through the difficult time when dad was hospitalized.

I also read and listened to Michelle Obama and how she became Michelle Obama. She was such a source of inspiration. Listening about her experience with her dad’s deteriorating health, helped me a lot during that one week in the hospital. My review here.

I had thought the worst was over, and that the month was nearly over too. But I was sadly mistaken. Right after my daughter’s birthday party, the day my parents were scheduled to fly back to their home, my dad had another seizure and it was really scary. We had to call the ambulance and cancel their flight. He had to get admitted straight into the ICU and we spent another week in the hospital until he was slightly stable, or stable enough to be able to fly back. I tried to keep my reserve and strength during this period. I kept running daily and read Animal Farm on the last day of the month. But the ordeal for me and my family is far from over. This happened in May – the cyclone Fani that hit Odisha, my hometown, right before they were to fly back. But we decided it was in his best interest to be back at home, closer to the hospital which was treating him over these years. Little did I know, that there were more struggles awaiting them, with the lack of electricity and internet or phone connectivity when they returned home. Its almost a week into May, and things are not that great. But more on that in next month’s wrap up. 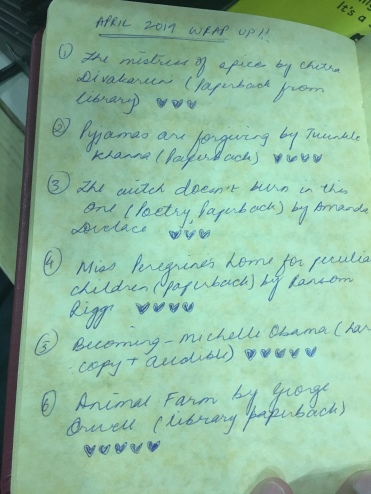