I am blessed that I have a local library and Waterstones just at a walking distance from my home and workplace. So you can imagine, I make a trip every week to either of these places, just to feed my soul, and spend some money lol 😀

So, at Waterstones, there is this really cute bookseller, and she has one of the funkiest hairdos or hair colours I have seen. Her current hair colour is in the shade of a subdued rainbow, light hues of green, blue and pink and she looks awesome. A few months back, right around when Children of Blood and Bone was just out in the stores, she told me she was reading it and was really loving it so far. She recommended that book to me, but I held off from buying it that day. Now, after having bought it and finally read it, I keep asking myself, why? why did I not buy it then? 😀 I should listen to book sellers with quirky hairdos more often ;).

I thought this book was amazing. The setting of the story, the characters, the world building and all the details about the different Maji clans, the map in the beginning of the book, everything was like a fresh and new concept to me. I have never read anything like this before. I mean, of course we have many books on magic and how to keep it alive and the fight of good against evil, but this book was unique in its world building and the details that went into defining the different Maji clans, their history and the fight against the evil ruler. It was also different because of the multiple thought process that went on in the minds of two protagonists- Zelie and Inan. One thought magic was the way to save everyone and the other thought, magic gave power to some people over others and ended up hurting more people than saving them. Who is right really?

It was interesting that the author chose to have multiple POVs and those were of a pair of siblings, who are linked to each other in one way or the other. The four protagonists are different and yet have some commonalities and something linking them to each other. I think there will be a lot more to these characters as the story unfolds in the next books of the series, and I am really interested to know what happens to each of them. Although Zelie was the main protagonist of book one, I have a feeling that Amari might take the lead or a more prominent role in book two. It would be really refreshing to have multiple heroes, instead of one person saving the world.

My favourite character in the first book: Amari

Who was your favourite character from the book?

The Maji clan I would like to be a part of: Either Emi (Maji of spirit/mind/dreams) like Inan has, or Iwosan (Maji of health and disease). Imagine how much help we could provide to the people suffering in the world if we could heal everyone for free 🙂

Which Maji clan would you like to be a member of? I have added some pictures here from the book of the different Maji clans, for reference, if you haven’t already read it 🙂 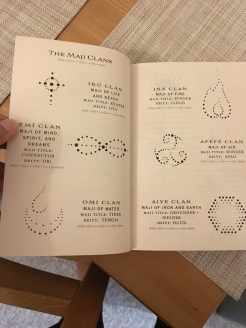 I have had such a great month of reading in September. I’m on my last book for the month and then will be posting a reading wrap up for September post soon:) How is everyone else faring with their September reads and challenges? I would love to get some recommendations for October too!