I am blown out of my mind. What a book, and what a story! Drama, female spy characters inspired by real life World War 1 and 2 heroines, mystery, road trips, adventure, feminism, rebelliousness, breaking out of stereotypes, heart break, pain, humour, hope, a delicious revenge- what more can one ask from a summer read?! 😀 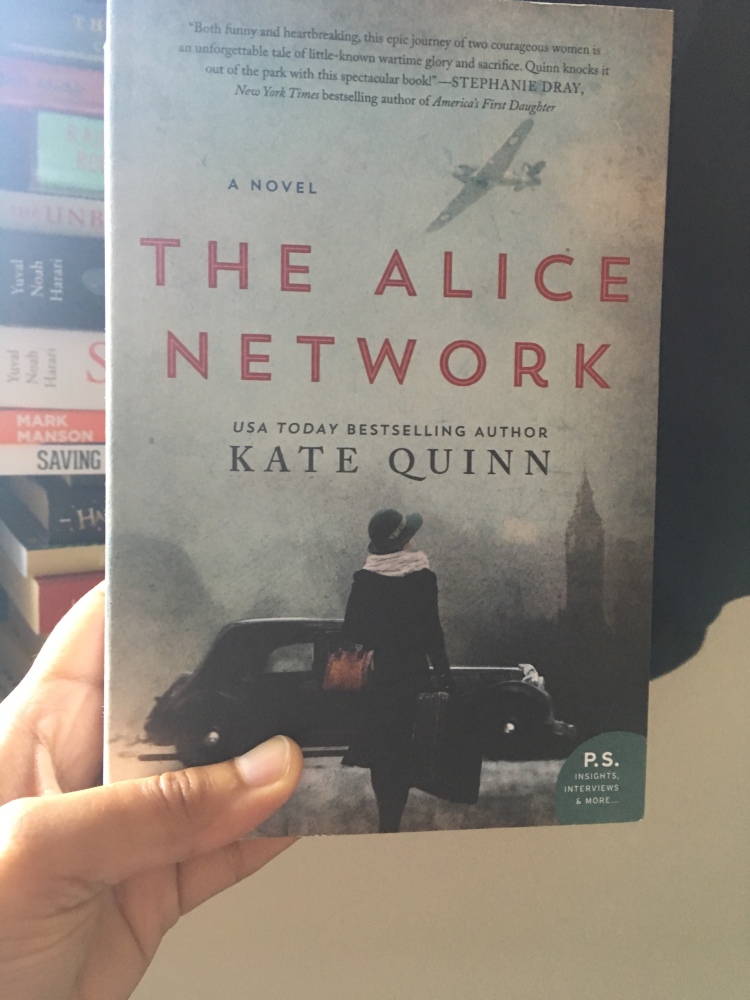 Part of my summer reading list, and also the book we’ll be discussing this week at the local book club meeting- The Alice Network is everything I love in a book. It is entertaining and enlightening. I’ve read a couple of books that feature around World War 2 and the atrocities of the Hitler led Nazi empire, but I didn’t have much knowledge about World War 1 and the Kaiser led German army/war, where France/Russia and Germany fought against each other with a few other allies on each side, until the war ended in 1918. The second World War, begins approximately 20 years later, and ends in 1945.

The story goes back and forth between two timelines and between two protagonists who were/are the leading ladies of their timeline and how their stories eventually come together in the end.

There is Evelyn Gardiner in 1914, who has a stutter, and can get away with anything because of her innocent doe eyed looks. But she is far from our average girl. There is her story, her heart breaking and yet courageous story, where we actually learn about The real life Alice Network that was operated by the real Loiuse De Bettingnies, who is a decorated war heroine now. (I am so impressed with her character, I can’t stop thinking about her. I would’ve loved to meet her).

Then there is Charlie St Claire, who is our current timeline protagonist, in the immediate post WW2 year of 1947, who is unmarried and pregnant, and in search of her cousin Rose, who has gone missing during the last 2 years.

And there is a villain, who needs to be hunted and very strong friendships among women, which is rarely seen in books. I was hooked! I’d recommend this book if you’re looking for a war spy story based on true facts:)

My favourite character in the book:

Evelyn Gardiner and Lili (alias for the real life Louise De Bettignies)- for their strength, spunk and single minded focus towards their mission. Salute to you ladies!

2 thoughts on “The Alice Network by Kate Quinn- Book Review”