Father’s day is around the corner and if you’ve read another of my recent posts, where I talk about including the celebration of ‘Days‘ created for humans and invented by consumerism, you’ll know, that I’d definitely want to celebrate Father’s day (even though the father in question may not want to..lol).

I know, moms are sacred everywhere, and in a lot of instances, moms literally raise their children, while fathers go to earn the bread money. But, the fathers are really stepping up their game lately too. I can say for a fact that my own partner, shares an equal and sometimes even more responsibility towards raising our daughter.

Funny thing is, we talk a lot about equality and emancipation of women, and removing stereotypes, but we forget to appreciate things that men do. So, this post is going to be a personal thank you post, to my partner, for being an awesome papa! I don’t know if he will read it, but I do want everyone else to know that I know men and fathers who are not the stereotype anymore.

My partner is the actual parent in this family I think. We have a 2 year old daughter (bless her), and I think she thinks I am her friend more than her mom. Both of us have full time jobs, but instead of going off for after office drinks or watching his favourite football/soccer matches in the evenings, he dives in straight to daughter care routine. He doesn’t think of this as a sacrifice either. He actually wants to be an involved parent 🙂

He gets her ready in the morning for Daycare, gives her a bath in the evening, feeds her dinner, and then entertains her and plays with her, if I have gone out for a workout, or gone out for a social meeting myself. He also helps me with the house chores, and both of us are equally involved in cooking, cleaning and meal planning. He reads her bed time stories and we take turns to wake up in the night to soothe her. He even takes days off from work when she falls ill, so I can go to work instead. He teaches her to play soccer, runs around with her, talks to her about monsters, and is very patient with her during her screaming phases too. He’s also great at inventing distractions for her. 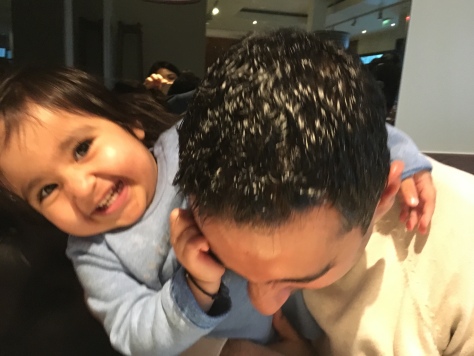 He has been there for all her immunisations and all her milestones. Men don’t come wired with the stuff they’re expected to do just as women don’t come wired with stuff they’re expected to do. But when men and women work as partners, and take joy in raising their children, it really feels like a family or team effort then and I can see how happy everyone is this way. So, thank you again, fathers and father to our daughter, for being a great parent and for being there for her:) She is too young to appreciate all you do for her, but I’m sure she will be thanking you herself in a few years:)

I also want to thank my own father in this post, because he has always been my idol. Strangely though, he wasn’t involved in raising us at all, since he was mostly away sailing during our childhood. But he became our best friend during our teenage years, because we realised how open minded he was and how he understood both his daughter’s desires, aspirations and struggles. My father always encouraged us to fight and speak for ourselves, always encouraged us to be financially independent and always encouraged us to not think of ourselves as frail women- to be strong. And I love him for that. Thank you Papa:)

And last, but not the least, I do want to add a link to another blog post written by a friend, who is also a stay at home dad, where he talks about his experiences as a stay at home dad. You can read the full article here for inspiration 🙂