This is the second time I have read a narration of the Mahabharata. I had grown up watching the older version of Mahabharata that was aired every Sunday morning on TV, in India. I remember being in awe of the show. We would watch it with my parents or grand parents eating yummy breakfast of puri and potato curry, or dosas and sambhar, or even samosas, and it was like a family thing to do every Sunday morning. Until the show ended and was replaced by others. I was a kid then, and all that I thought of was how magical the whole show was, and how many twists and turns were there in the show! I didn’t know it was based on a book then.

A few years back, I was annoyed by all the religious talks given by Hindu ‘babas’, citing the Bhagwat Gita, and I wanted to read it for myself before letting people tell me what is written or mandated in the sacred religious text of the Hindu religion. Even as a child, I could never understand the Gods in my religion- there were just too many. It was like you could pick and choose a God to be loyal to, depending on what you wanted in life or what characteristics of that particular God you liked. So after hearing many stories about different Gods, I decided, I really liked Shiva because he seemed so un-godly, and then I liked Ganesha, because of his love of books and food. But as I started growing older, and with each of life’s experiences and learning more of the science of things, I’ve leaned towards Atheism more. I’m more of what you could call a closet-atheist. I still pray and participate in all the religious ceremonies when I am at my parent’s on in-law’s place, but I don’t believe in them the way the others do. When I am alone, I don’t practice anything at all. I do believe in Karma and a higher power- I just don’t believe in forms of Gods, or heaven or hell. I think this life, and this planet is all we have- but that is just what I believe in. Anyway, so coming back to the story, I bought Eknath Easwaran’s translation of the Bhagwan Gita and read it. If you see my copy of it, it is highlighted with notes, thoughts, agreements and disagreements over and over again.

Then, when I got pregnant, I got my hands on a copy of Devdutt Patnaik’s translation of the Mahabharata and started reading it. I was starting to get deeply disturbed by the contents of the book this time around. The interesting part about Devdutt’s translation is that he doesn’t show anyone as Good or Evil in the book, as was shown in the TV series. He stated the facts as they happened, and you start to realise, that no one in the book was either completely good or completely evil. I was later chastised by the elders in my family when they found out I was reading Mahabharata- the book that talks about mankind’s entry to the fourth age of destruction, while pregnant..ahem. Like I said, I’m not the superstitious sorts, but my family can be sometimes 🙂 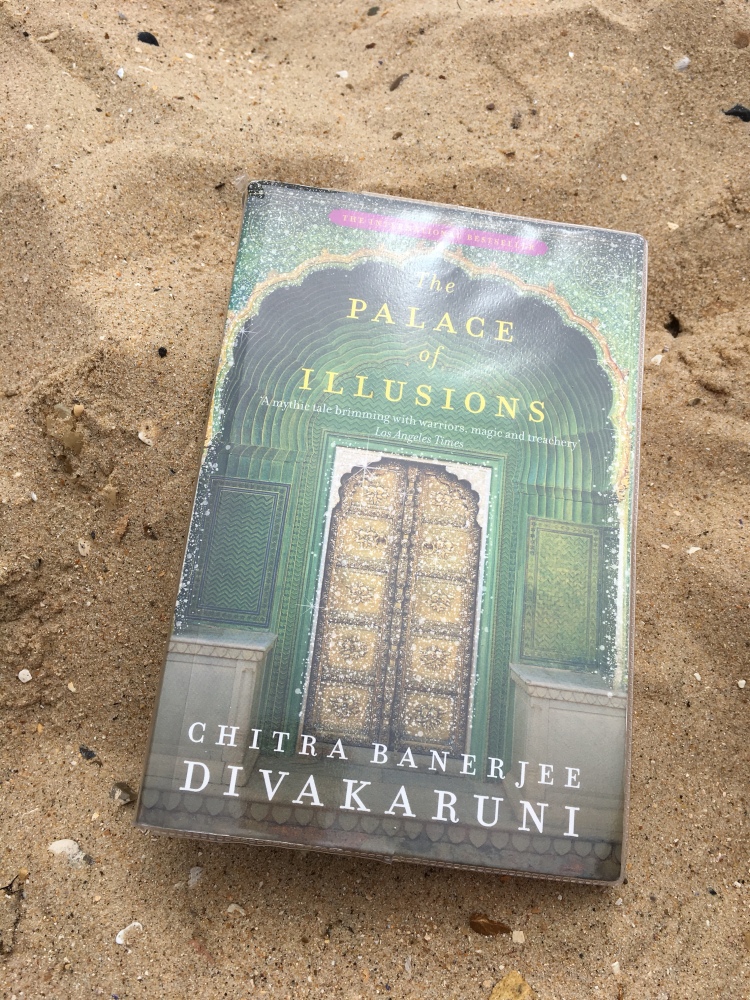 Now, after two years, I have read the Mahabharata again. But this time, Chitra Divakurni Banerjee has approached the story from the perspective of one of the most controversial fictional (some might argue this) female character in history- Draupadi/Panchaali. The story is as disturbing as it was then, but it does bring a lot of things into perspective. Especially when we hear many times in India and probably elsewhere in the world too- that women have been the cause of all great wars. It is such an unfortunate thought to blame a helpless woman who, irrespective of her stature in society, is bound by laws created by men and then blamed for man’s destruction, just because men were unable to control their greed, lust or jealousy.

What I enjoyed about this perspective was that the author has shown Draupadi to be a real woman, having to go through all the emotions women like us have even today. We are asked to be great, to hold our values and honor for our families, but at what cost? At the cost of silencing our own desires forever? And even when, she does uphold her side of the duties, she is shamed in front of everyone, time and again, and no one comes to her aide. I liked how Shikandi says, ‘Wait for a man to avenge your honor and you will wait forever‘. Sometimes I feel that is so true, even now. Draupadi is punished so brutally just because she hurt a man’s ego by smiling and finding something that truly was a misfortune instead of a planned attack? Doesn’t that still happen in many countries in our world today, where girls and women are tortured and punished just because they did not reciprocate a man’s love or advances? Everyone says and it is mentioned many times in the book as well- that if Draupadi had forgotten the whole incident, the war could have been avoided. That she let her heart get tainted by revenge and looses much more in the war, than she gains. Personally, I applaud her for not forgetting. There is a line that a man should not cross, and if that is crossed, the woman has all the right in the world to demand justice. However, war is something that I do not support. I also know, that when one sets out for revenge, one should dig a grave for himself/herself too. But seeking justice for an act of crime, should not be condemned.

There are a couple of things that I don’t agree with, with respect to the concepts of Mahabharata.

I really enjoyed Chitra’s version of the Mahabharata and if you haven’t read it yet, I recommend a read, just for the fact that Mahabharata is an epic that talks about how revenge and greed can bring about the downfall of us. I enjoyed this book from my summer reading list:)

What are your thoughts on this book? Are there any other versions of Mahabharata that you’ve read and enjoyed?

One thought on “The Palace of Illusions by Chitra Banerjee Divakurni”