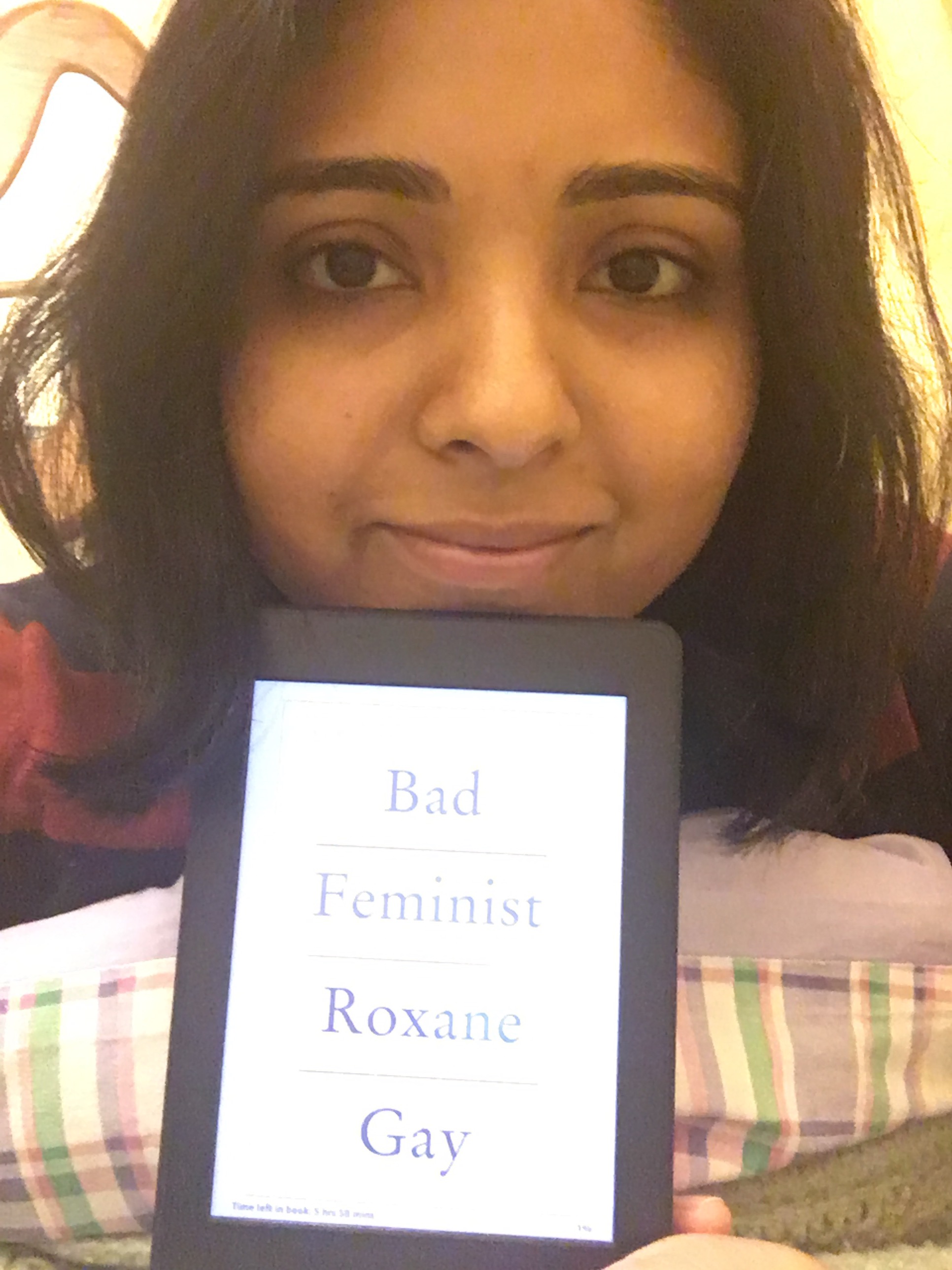 My favorite definition of “feminist” is one offered by Su, an Australian woman who, when interviewed for Kathy Bail’s 1996 anthology DIY Feminism, said feminists are “just women who don’t want to be treated like shit.” – From Bad Feminist: Essays

The statement above is my favourite line from the book as well. I didn’t know anything about Roxane Gay, until as part of the OSS (Our Shared Selves) book club recommendation of the month, her latest book- Hunger: A memoir of my body, was made. Everyone on the group then started talking about how amazing her most recent book is and how relevant it is. Everyone also started talking about her other book- Bad Feminist and how some members wanted to read that before Hunger. I read some rave reviews on Bad Feminist, so being a feminist myself, I couldn’t wait to get my hands on this one.

I really enjoyed the book. This book is a collection of essays, showing the author’s views on various subjects- ranging from the very serious topic of violence against women and racism to light hearted reviews of her favourite books and movies, or even criticisms of some of the more popular entertainment we have been unlucky to experience over the last few years.

With regards to feminism, she talks freely about a lot of relatable confusions, myths and hype we seem to hear about. She also talks about the many occasions where, although identifying as a feminist, she fails to act like one, or in other words, acts like a bad feminist- not because she doesn’t believe in them, but just because we’re human in the end of the day. I have the same failings as a feminist myself- on some days, I will dance to a very derogatory song about women, just because the tune is catchy. On some days, I will go to watch a soppy romantic movie with a ridiculous or stereotypical premise about the leading lady or the leading man, just because the actor looks good. On some days, I listen to a demeaning joke about how husbands have to ‘deal’ with the annoying ways of their wives, feel upset, and yet fake-smile, just because I don’t want to be branded as a feminazi who has no sense of humour. After all, she rightly points out:

Inappropriate humor is often the best kind. Everyone knows at least one joke she finds funny even though she shouldn’t.

But this doesn’t mean that I won’t stand up and make a hue and cry when I see injustice happening to a woman. When a woman is subjected to unnecessary violence. When a woman is denied certain rights, just because she is a woman, I get very angry. All this is mentioned in her essays too, and I really loved all those chapters.

The only reason I gave this book a 3.5 rating, was because I was unable to relate to certain subjects she covered- mainly relating to racism in America, because I have not faced this personally, or experienced it. I have read and watched a lot of movies regarding the subject, but as she rightly points out, movies do not do justice to the issue of racism or any other type of cultural inequality we face as humans. We have to understand that movies are made for entertainment- We cannot take them at face value as lessons learned. If you want to learn, read books, or watch documentaries- maybe. Or best option- study the subject and talk to people experiencing it. I loved the movies – Django Unchanined and Inglurious Basterds, when I had watched them- only due to pure entertainment purposes and because I like Christophe Waltz and his acting. However, now I have a completely different perspective to the movies after reading Roxane’s views on why these movies are so unjustly made on the subjects it supposedly addresses. Sigh..

Instead of offering me some new insights on this troubling reality, Django Unchained simply served as a reminder that the more things change, the more they stay the same. – Roxane Gay

I could go on and on about each chapter and essay she talks about, because there really is a lot to discuss and debate and feel indignant about, from each of the subjects she touches on. I would recommend this book to all my girl friends and my male friends- just because it is such a well written book and touches on subjects we should all be talking about at least, without being dishonest to ourselves.

I would love to hear your thoughts on the book if you’ve read it. Now, I’m wondering, which is the next book I should pick up. I’m lagging terribly in my reading goals this year..lol!