After an extremely nerve wrecking start (we found out the visa rules had changed, and we had only 4 hrs on a Friday to sort it out.. Thank god for money though, it does seem to sort the most impossible of problems!), to this long awaited vacation in vietnam, my husband and I arrived at the Hanoi airport in Vietnam on Saturday afternoon. It was a long queue at immigration, quite similar to India, but we made it eventually, found our cab that was arranged by our hotel and went about our way to the hotel. Since I’m an Indian, two things struck me immediately when we left the airport- 1) this place reminded me of India, a mix of Mumbai and Kolkata I think and 2) this was so different from India because poeple drive on the left side here! Lol

Ok so since I’ve come back to finish this travelogue after almost a week of returning back, I’ve decided to try a short and sweet day wise approach and just put pictures and some noteworthy (personally noteworthy, to be precise) facts in this😊 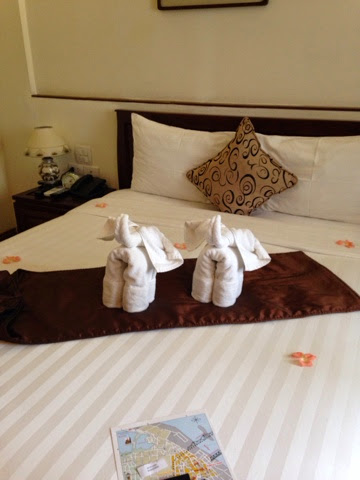 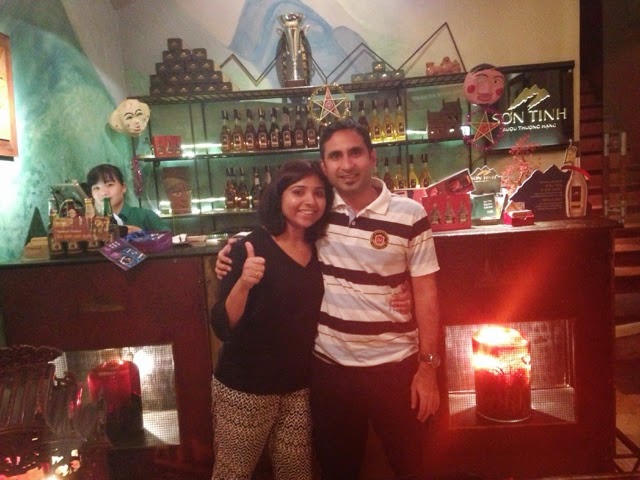 – stayed at this super nice hotel called ‘charming 2’ hotel with the best service ever! 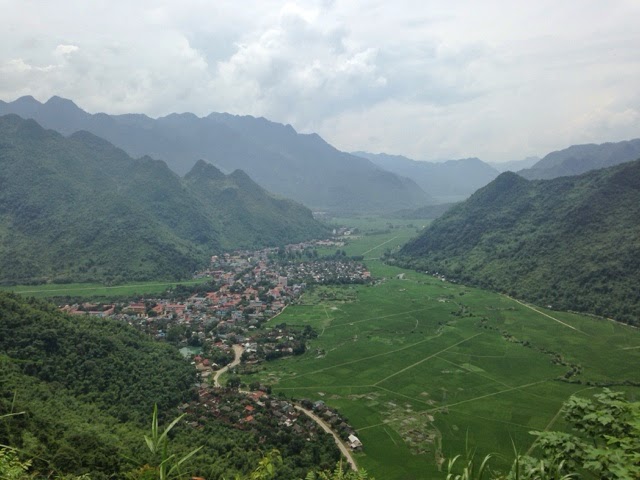 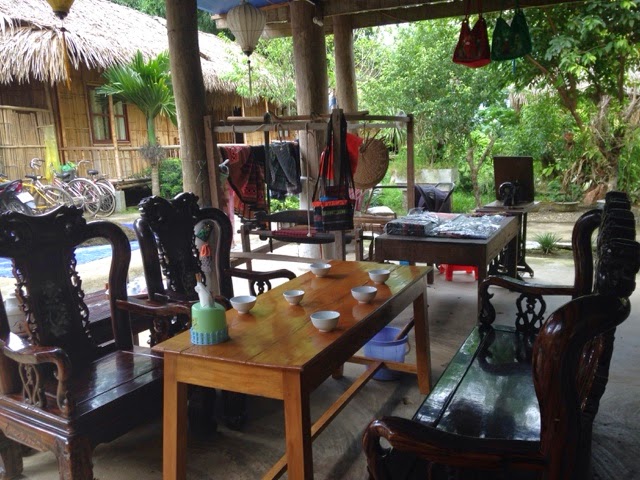 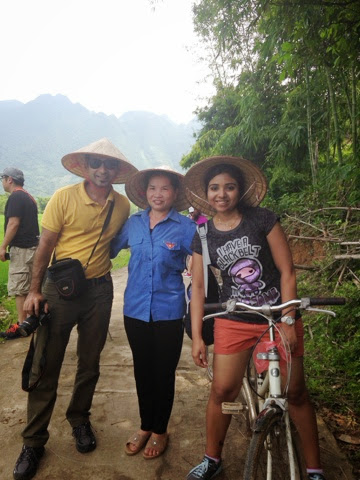 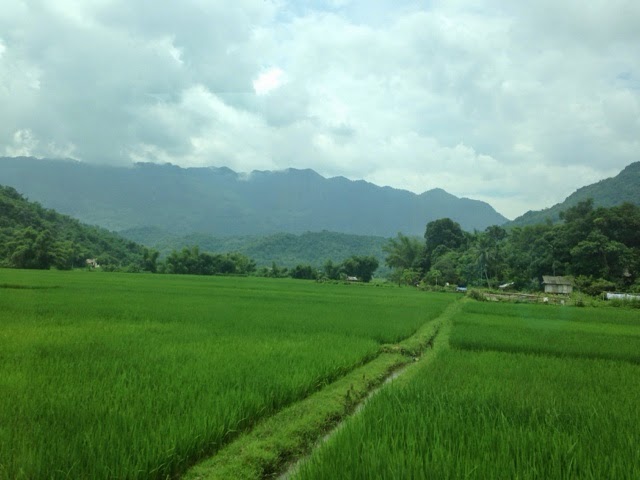 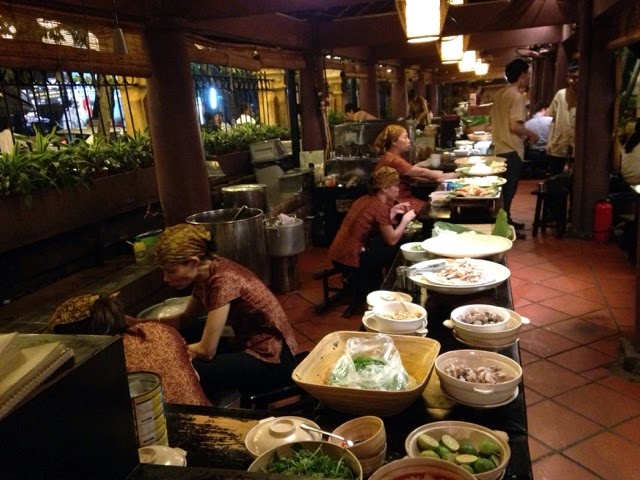 – left for this cute little Thai village in Vietnam ( yes that’s right!) in a cramped up bus, where we met a super active woman we named ‘energy’, made friends with a Vietnamese tourist called Thao and had a German guide called Nicholas for us ( since we were the only English speaking tourists onboard!)

– stopped at a place where they sold snake, scorpion and frog wine.. Yuckkkk

– had yummy lunch in a small village and then went cycling with the local village guide among paddy fields- heavenly! It was so beautiful! And very hot .. Hehe

– had a mighty fall while trying to go downhill on a muddy slope on my cycle.. Hehe, the result was two bruised legs for the rest of my trip

– returned back to Hanoi by dinner time, and had another amazing Vietnamese dinner with beer at An gnon, I think that’s what it was called 😊

Day 3 & 4- Halong bay- one of the six natural wonders of the world! 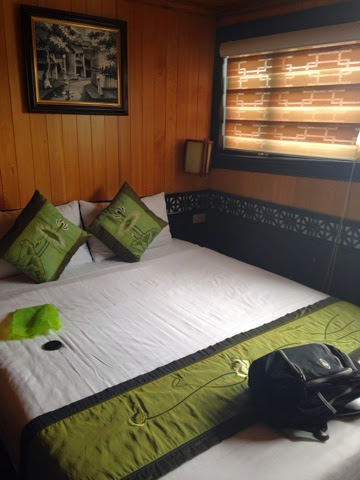 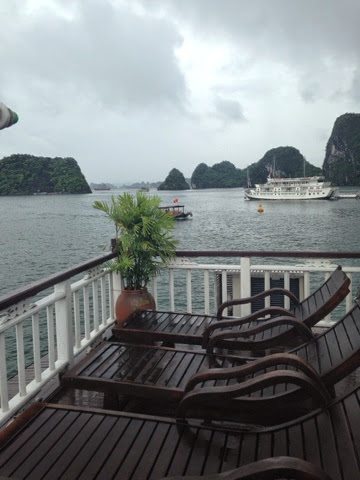 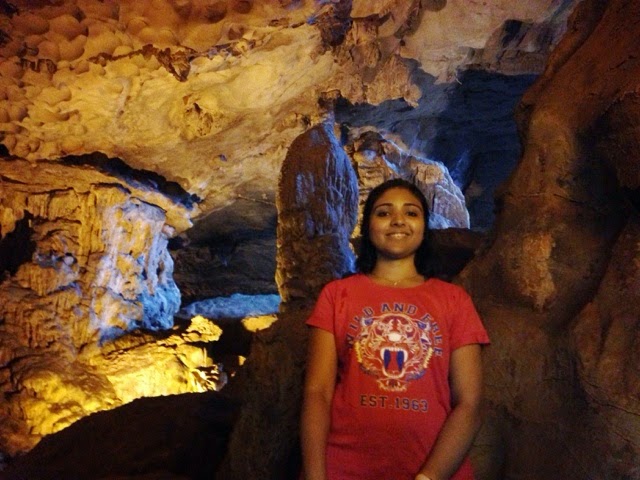 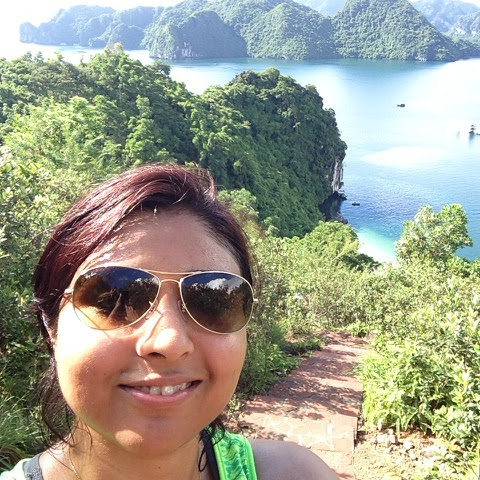 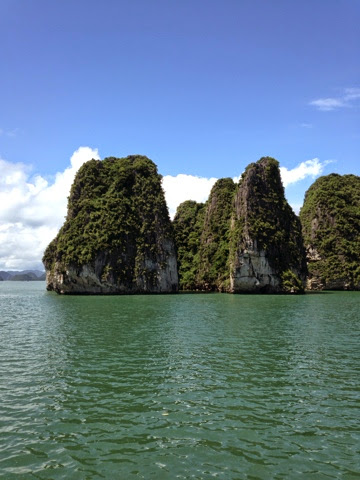 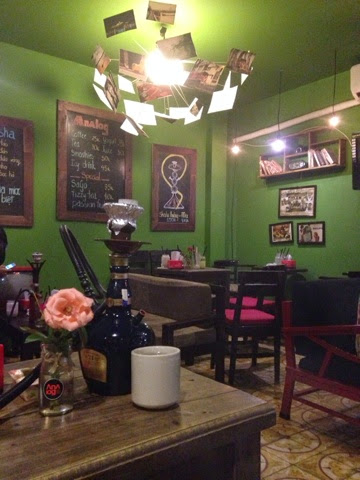 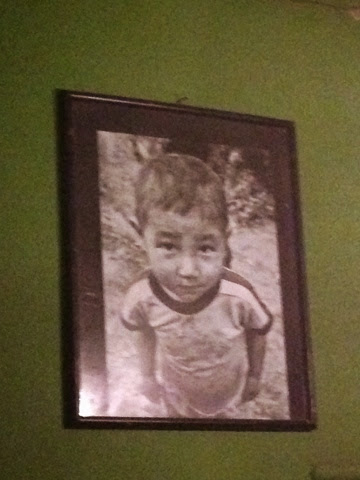 – left for halong bay in a coach full of foreigners, this was the first place I was in a country where Indians were rare! Lol, reached the jetty pickup place by noon, were led into our ship- galaxy cruise in a small boat and checked into our cute little cabin by lunch

– had amazing meals, and time on the boat cruise, talking to people from England, Poland, South Korea, New Zealand, Amsterdam and listening to all their stories and travel experiences over lunch, dinner and drinks on the deck.. It was a cool experience 😊 it was funny, coz the Korean couple spoke French better than English and were so cute!, the kiwi couple lady had backpacked in India alone in her early 20s! The girls from Amsterdam had never been stoned! The Brit couple had been to an Indian wedding, and we ran into them again later at Ho Chi Minh!

– we went cave exploring, it was amazing.. And there was a ‘wow’ factor there too.. Lol

– tried my hand at kayaking and decided that wasn’t for me, my husband was pretty annoyed at my lack of adventure though.. Hehe

– hiked up a mountain near a beach we docked at and then chilled at the beach reading a book.. Blissful!😊

– checked out finally the next day and reached back at Hanoi by evening, went to another nice little Vietnamese restaurant for dinner later, and found a cute little sheesha place nearby, where we had a sheesha and some coffee 😊 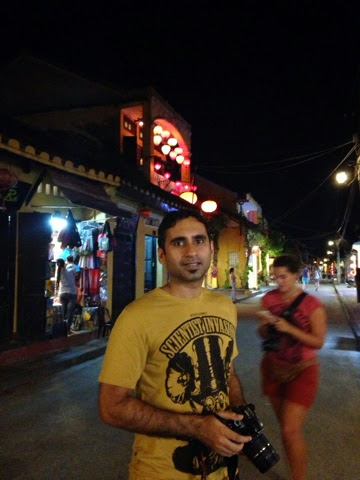 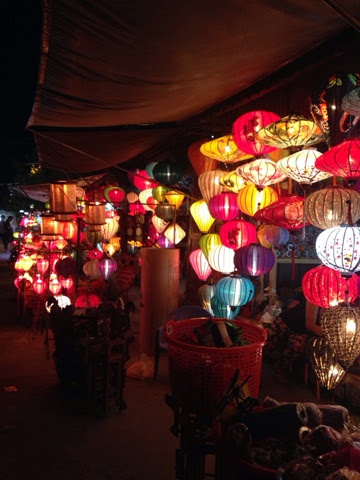 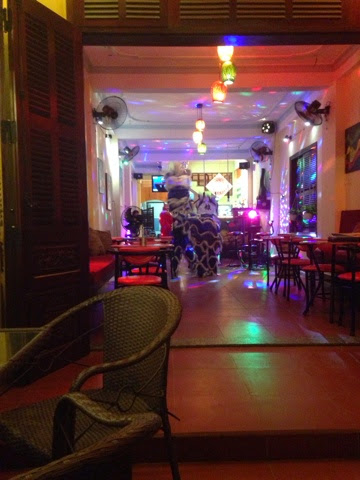 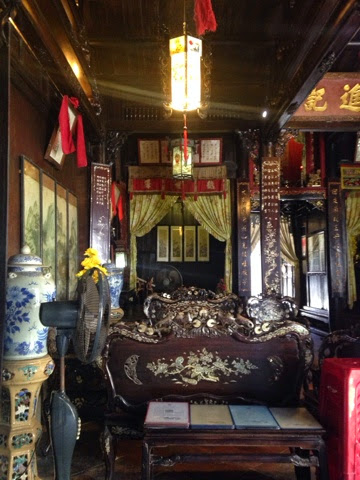 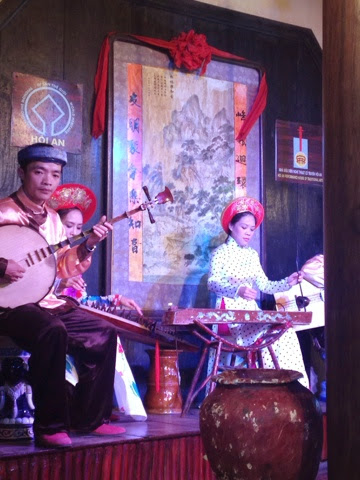 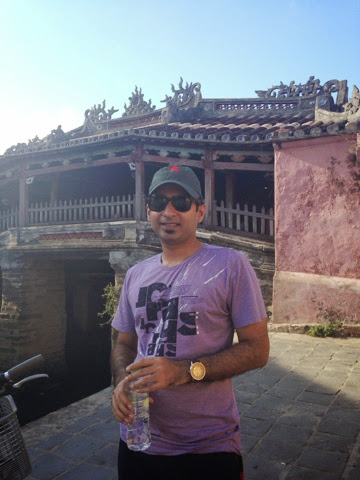 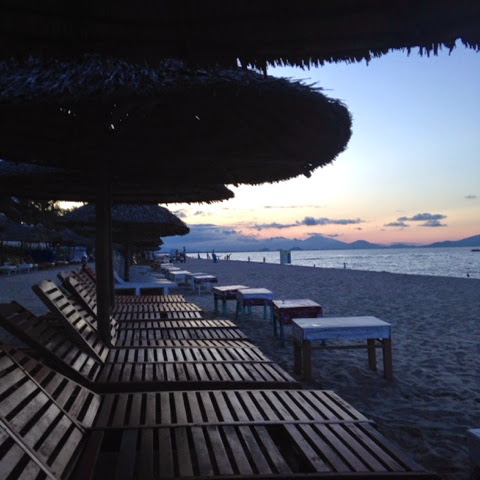 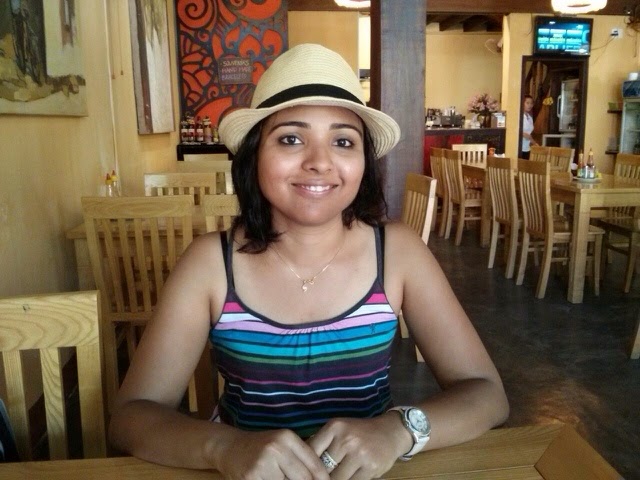 – checked into a huge room after a really pretty drive from danang airport at hoi an and walked down to see the night market place, and grab dinner. Little did I know that we’d come upon a magical place along the water lit with lamps, without the discomfort of the noise and pollution that vehicles bring, since this place is doesn’t allow vehicles, except for bicycles! We found a cute little restaurant by the river, and I got drunk after ages! I think I danced my way back to the hotel that night, much to the embarrassment of my poor husband..heheh

– Next day, after another yummy hangover curing breakfast, we rented bicycles and cycled around the heritage village and got some lunch at a cute little cafe. Cycled back around 7 kms to the closest beach- An Bang, and it was amazing:) We got two beach chairs to lounge about in, while sipping on our drinks. We thought we’d have seafood by the beach for dinner, but didn’t find the places too much to our liking, and then my husband stepped on an ant hill- so we had to quickly ride back home, get some medicines for him and headed back again to the Heritage village by the stream to have dinner..hehe

– Checked out on the next day, after a lazy brunch again, back to Danang airport, for our final destination to Ho Chi Minh City 🙂 (or HCMC, or Saigon- whichever you prefer)

– Day 7 evening we checked into our hotel at HCMC, freshened up and headed out to explore, found the most amazing cold coffee just a few blocks away from our hotel, where we bumped into one of the british couple from our cruise at Ha Long Bay! what a small world eh?! They were leaving that night, and we exchanged notes, said sad goodbyes to the place and headed to our respective directions

– Walked down to another tourist place called Bitexco Financial tower, and on the way crossed so many tiny little coffee shops where youngsters were enjoying an evening with friends over some iced coffee or hot coffee. Made me smile and wonder, why aren’t we more like them? Why can’t young people hang out more at coffee places, instead of bars?:) Food for thought maybe..so back to the Bitexco tower- you can take a ticket and go right up to the most amazing view of the city! It was breathtaking! We took our time there, and had a beer at the rooftop bar, and then headed back to our hotel for dinner and an early night

– Day 8, we had breakfast at the hotel (which was a bit of a disappointment though, after all the yummy food we had eaten at the other hotels, but well, guess we were spoilt already:) so anyway, we headed off to see the Independence Palace, got our tickets and spent almost 2 hours inside! This place is totally recommended to history buffs, who just want to get a feel of the time during the Vietnam war, the kitchens, the hall, the bomb safe bunkers, old vintage cars, parts of the tank that maked the victory of the Vietnamese over the mighty Americans, and a free running war documentary, explaining all this. You could get a sense of how hated the American army was in Vietnam during this time, but times have changed now, and we’ve come a long way from that war- so it was good to see a lot of Vietnamese guides explaining the place to American tourists there

– That done, we stopped over for lunch at another cafe, and then rounded up our tour with a visit to the old post office there. I got excited and bought two post cards to send to my sister and my best friend, but I don’t know why, it never reached any of them..anyway, at least I had the excitement of sending postcards 🙂

– Day 9, we left back for Singapore

I simply loved Vietnam! I loved the vibe of the place and the genuine affection of the people there. It is quite like India in so many respects, yet so different, in terms of the peace and friendliness and openness that I saw and experienced in this place. I would recommend Vietnam to every traveler and would really like to go back there sometime in the future, if possible:)